JGuru
Home Video Game Diablo II: Resurrected Will Be Just How You Remember The Original

This year is special for Blizzard, the company turns 30, and to celebrate it, this year’s BlizzCon has been loaded with news. The company has one of the most loyal and veteran communities in the world of video games, with users who have been playing World of Warcraft for more than a decade or since 1996 hooked on the Diablo saga. And it is precisely the latter that Blizzard wanted to compensate with the remastering of Diablo II, an action role-playing video game or ARPG that marked a before and after in the industry.

The pressure is high to modernize a game that thousands of fans have fond memories of, but as Diablo designer Andre Abrahamian and Art Director Chris Amaral revealed during a Q&A session, the priority has been to maintain the loyalty of the game. the game, that the players find what they remembered, but brought to the year 2021.

THE DIFFICULTY THAT YOU REMEMBERED

Many things define the ARPG genre over the past 20 years, but to this day, Diablo II is still relevant, so we knew we had to stay as close as possible, so we chose to remaster it. Also, the design team shares the policy of leaving 70% as is and renovating 30%, keeping the atmosphere and the original design, specified Andre Abrahamian.

Considering the bad reviews that Warcraft III Reforge received from players for the problems it presented, ‘playing’ Diablo II seemed too sacred to do a bad remastering, and by what seems since Blizzard has been put the batteries. The little that Diablo II Resurrected was able to see during BlizzCon, on a visual level, seems to meet expectations.

This remastering is faithful to the original, so there are no balance adjustments of the game. Video games of that time were much more difficult compared to modern ones and required a specific strategy. In that sense, this is the Diablo II that players remember, added Andre Abrahamian. Also, as they commented, it is not in their plans to replace this game, since both will be available through Battle.net. If players prefer the older version, they will be able to play it without problems. Also, as it is integrated into this platform, Diablo II will have an anti-cheat and anti-bot system. Adding protection against item duplication and toxic behavior between players. 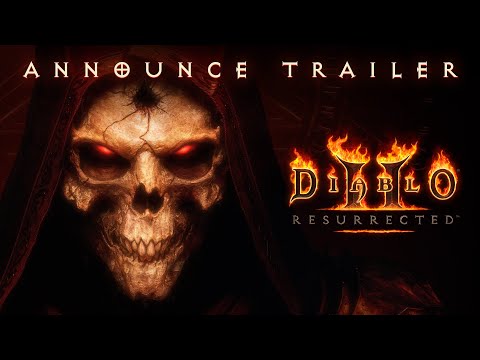 At the graphic level, the jump is enormous. While the original game is 2D with sprites (created from 3D models), this remastering is completely rebuilt in three dimensions. To achieve a resurrection worthy of the original, Blizzard did not need a necromancer, but it did need hundreds of files of original concept art, 3D models, renders, and codes, that is, an overwhelming archival work.

The designers specify an example, the changes in the barbarian class. That this time adds elements of Celtic and Slavic culture to the original design, complementing it. “When it came to modeling the character, captures of the original were taken, 3D rendering was applied to them and overlaid with the remastering design to verify if they match and look similar,” the developers explained.

Diablo II Resurrected is so faithful that they have even kept some design decisions that they used at the time to speed up the work that would no longer be necessary today. For example, in the original, the succubus (an enemy of the game) were designed from the body of the assassin class, something that was very typical in fighting games of the time. Well, it seems that for this remastering they have done the same, a recycling dynamic that will also be seen in other characters in the game.

The original sounds and voices have also been kept, adding only some effects such as echoes, sounds according to the weather of the game, or the screeching of armor. In terms of more technical aspects, Diablo II Resurrected has dynamic lights, high-resolution textures, shadows, and endless details that obviously the technology in the two thousand did not allow to add. Also, in that remastering, a function that Diablo III already had has been added, the possibility of zooming in to appreciate the modeling of the characters more closely. Although mentioning the theme of characters, the determination to be faithful to the original has led to discarding the option of being able to choose between a female or male character in each class (as Diablo III does include).

There is a lot of charm and storytelling behind how the game was told and we wanted to be true to that because Diablo 2 is a very important story for the franchise. We wanted to keep the game’s characters as they have been for 20 years as they are. classic, iconic I would say. I think adding additional genres would be a different game and we wanted to make sure we keep the classic intact, the designers stressed.

This remastering will not only be released on PC, but it will also be available on consoles (even for the next generation with unspecified improvements), also, according to Abrahamian, they plan to support the transfer of saved data (cross-progression). They also confirm that the data of the characters can be shared between PC and console, but for now, no more details are known regarding the configuration. Regarding cross-play, the designers confirm that it will not be possible, although the leaderboards will be general.

As for the multiplayer mode, the PvP mode will still be there, the same as the local mode, but it will be easier to find other players, for example, taking into account the difficulty levels. Diablo III has served as teaching or inspiration for some features that enhance the gaming experience. For example, this remastering will also have a shared stash with all characters on the account and the feature to automatically collect gold.

Another small detail that will make life easier for players are that objects on the ground will stand out more to the eye. Similarly, the game developed by Blizzard Entertainment and its in-house studio Vicarious Visions will include support for ultrawide and on PC it will be able to run up to 8K with no frame rate limitations. While in the new generation consoles it will be played in 4K at 60 fps. With a date yet to be specified, Diablo II: Resurrected will be released this year for PC, Xbox Series X | S, Xbox One, PlayStation 5, PlayStation 4, and Nintendo Switch. Those who do not fear the Lord of Destruction can sign up to try the game in technical alpha for PC.