JGuru
Home WWE Bianca Belair; “I Want To Give The Best Version Of Myself...

An international press conference with various media outlets to speak with WWE superstar and 2021 Women’s Royal Rumble winner, Bianca Belair. In it, the American-born wrestler, self-styled The EST of WWE has spoken about her victory in the 30-woman battle royal, as well as what she wants to demonstrate on her way to WrestleMania 37. Congratulations on your achievement in the Women’s Royal Rumble. It was impressive. How have you felt since you won the battle royale?

It has been incredible since last Sunday night. I think my path to get to WWE has been unique even being in WWE. I did not watch wrestling as a child, I never thought about being a WWE superstar. I did not know this was it. my dream until it became reality. And now I don’t see myself doing anything other than being a WWE wrestler. My path in the last five years to where I am now has been one of ups and downs. I feel like I’ve had the patience and that I have focused on the things that I should focus on because I want to enjoy what I am doing. 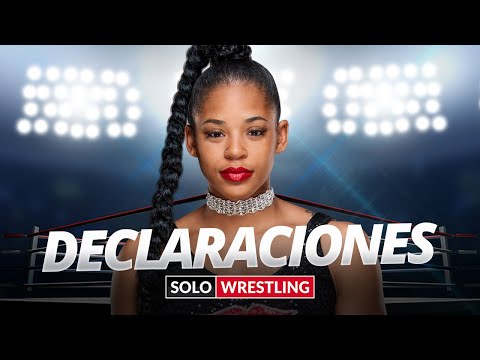 Winning the Royal Rumble is a difficult feeling to describe. I don’t think I can put into words what I feel right now. When you’re in WWE, everyone’s dream is to be at WrestleMania. That is the goal of all of us. Being on the big stage, and that’s WrestleMania. Now, to be able to go to WrestleMania and have a title shot and a chance to become a champion … what more could you ask for than that? And after that hearing, the words of Rikishi, a legend like him telling me things like the ones he said, gives me even more motivation to go to WrestleMania with more confidence. He has always been one of those who have believed in me.

You have become the first African American fighter to win a Women’s, Royal Rumble. Taking into account that we are in Black History Month, what does this milestone mean to you? Just by staying the way you are and going for your own goals and achieving them, you are creating history for yourself. I want everyone to see it and use it as motivation. There’s a match in mind heading into WrestleMania 37. A match between you and Sasha Banks for the SmackDown Women’s Championship. We would like to know your opinion before you make a decision.

I see a lot of diversity of opinion on Twitter and social media that they would love to see Sasha and me in the ring at WrestleMania. Of course, that would be a great match for all that it could represent. But you can’t forget about Asuka or Io. Shirai. They are both equally champions, they have great potential so for me to be with them and share that potential would be a great opportunity. I agree with you, but at the same time, I still enjoy the moment of winning the Royal Rumble.

It impacted me on two different occasions once when I won the Royal Rumble and the other when I saw that I was going to WrestleMania. I keep trying to live that moment and I’m still very excited. I don’t want to make any emotional decisions, so I’m trying to control my emotions, especially before SmackDown, and from there make a decision. But for now, I want to live in the moment, and being a great, great decision, I want to see my different options and go from there.

Regardless of who you face on the Greatest Stage of All, what is it that you would most like to show the WWE Universe about yourself?

I want to show that what I said I was going to do is going to happen. What if I call myself the strongest, the fastest, the toughest, and the best The EST of WWE, I mean it and it’s true. And if I say that I am going to do something, it will happen. That is what I want to demonstrate by going to WrestleMania.

I also want to demonstrate that, although it sounds like a cliche, and I know it sounds like that, but it is that true, If you have a dream and want to do something, it is possible to achieve it and that the most important thing is to be true to yourself and shine and not allow anyone to bring you down. You have to live up to your potential and always try to be the best version of yourself. Myself and in that process, you can achieve great things. In my process of being true to myself and the best version of myself, we hope that its fruits will be to become a champion at WrestleMania.